The old adage goes that “you should not judge a book by its cover” and though it is a virtuous sentiment it is not one that is typically followed. Welcome to day Fourteen of my 31 Days of First Impressions Challenge! In this challenge I will be reading the first entry or chapter of a different serial (or web fiction) and then give my first impressions on them be they good or bad. In short: I will be judging a book by its cover.

Today’s serial in my challenge is Taylor’s Ploynomials by Mathtans.

Author’s note: I may have bias as I wrote for this author’s other serial, Time and Tied, for an April Fool’s Day swap. As such I was already familiar with the author’s style of writing. 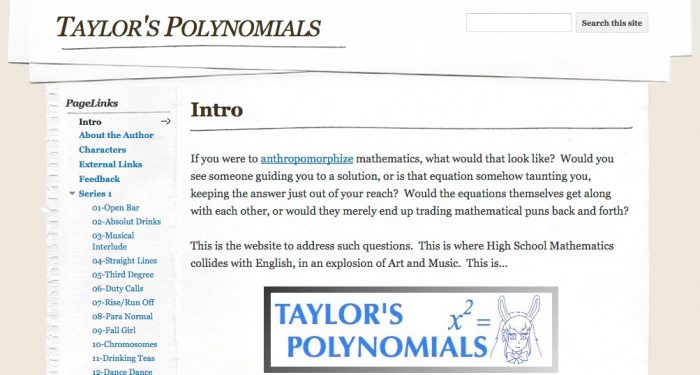 Eight years ago I would have been very jealous of this website. It is exactly what I wanted to do for my webcomic, but could never find a way to do it that would look pleasing to the eye. The rough scrap paper look is an aesthetic that I would like to try to revisit someday. The site feels dated though, and lower resolutions for mobile devices seem to break it. At a full resolution on a desktop computer, the site is still functional and is pleasing to the eye.

“Lyn glanced around the room. She wasn’t sure what she’d expected to find in this bar, so recently opened. It looked to be a simple affair… a few stools, a couple tables of value with some chairs, generic lighting. Nothing really made it stand out. Except possibly the bartender.” –Taylor’s Polynomials, 01-Open Bar.

The hook is decent. This is something I would expect to read in an old noir. Mathtans wastes no time creating his setting, and does a good job adding an air of mystery to the bartender. This air of mystery, and noir tone, make the rest of the reading a little… strange.

So, Taylor’s Polynomials is about personified math. Personified. Math. Further, the “chapter” is only about 200 words. I-I don’t know what this is. There is absolutely nothing traditional about this serial.

The “chapter” is presented with an illustration of the two characters that are introduced. The illustrations themselves look a little rough. Whatever program the author used to draw them has a tough time filling in spaces between the lines. Personally, I could have done without the illustrations.

Due to the short nature of the “chapter” (it would probably be more accurate to call it a page) I did go on to read about four more to get a foot hold on what I was reading. Each character represents a function or an equation in math. As such, the writing is chock full of math puns, some of which are more obvious than others. The author is actually very witty in this way, and the writing had a certain charm that was hard to put my finger on. I did find myself chuckling at one or two math puns, but was honestly pretty flabbergasted for the brunt of it.

Mathtan’s prose is pretty straight forward, but sharp. The strongest feature of which being the conversation that takes place in it. The bulk of his writing is that of two characters having a conversation, and at no point did I find myself confused as to who was talking.

I don’t know who this is for. I write a Black Humor Dadist comic done when I am inebriated, I have no ground to stand on when claiming that something else is too obscure, but this is OBSCURE. If you enjoy puns, especially math puns, you will really enjoy this serial. Like I wrote earlier, this serial does have a charm to it. Would I continue to read it? Well, I did read past the first entry, so technically… yes? I am not sure if I would return, as I am still digesting this thing that could only exist on the internet. I get the feeling that this would work out much better as a webcomic. (Update: it is a webcomic)

As stated before, I have actually read a good amount of Mathtans’ other Serial, Time and Tied. That serial is about a group of friends who have to deal with the messy nature of time travel, and it is one that I enjoyed. Though they share some of the same kind of illustrations (something I could do without) and the same sort of problems site design wise, Time and Tied is a very different animal. I am not sure what my reaction to Taylor’s Polynomials would have been if I had seen it first. I might actually be more befuddled because I saw his other serial first.

Taylor’s Polynomials can be found at https://sites.google.com/site/taylorspolynomials/ and you can vote for it on Top Web Fiction here.

Join me tomorrow for my impressions on safra’s serial Death’s Door, or check out my own serial: